From A Cottage in the Foothills …

It’s been a busy few weeks since we hit the ground running at my new pastorate, Pleasant Ridge Baptist Church in Morganton, North Carolina. People have asked how Cheryl and Michael especially like it here, and the answer is that they absolutely LOVE it!  It would be difficult to find a prettier place — nestled in the foothills of the Blue Ridge Mountains, just a few miles off of the Blue Ridge Parkway. And you will find no sweeter, more loving and accepting people anywhere  than those at PRBC.  From our perspective, this was indeed a match made in heaven!

Here’s a picture of some of our church family at  my first-ever Easter sunrise service: 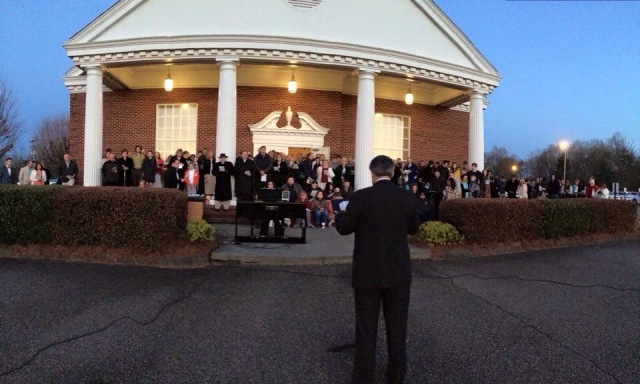 And although I have been too busy to record all of our family “antics” the past couple of whirlwind months, we have had a great time settling in, and have had plenty to chuckle about:

We had only been here for a couple of days when I went to Hickory to run some errands — and I promptly got lost in the countryside!  At one point while I was trying to get my bearings, I looked out to the landscape on my left, where there were some beautiful hills, with some cattle grazing in the valley below. It was still early that Saturday morning, and there was a mist in the valley; a gorgeous scene. I said to myself out loud: “Well, if a guy’s got to be lost, this sure is a pretty place for it!” 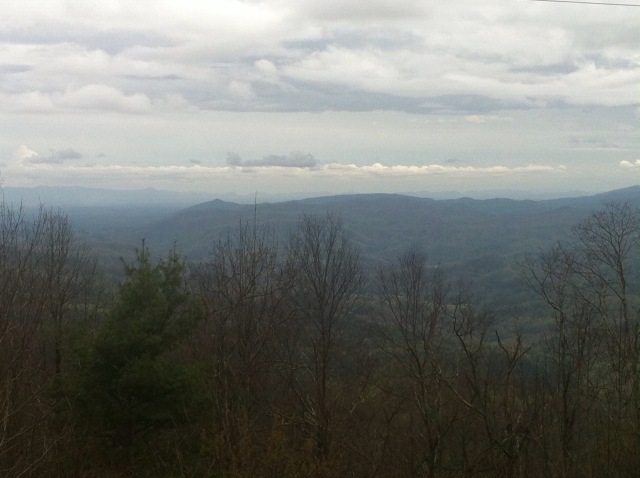 SHE DON’T WANNA GROW UP!

I was working on my computer in the living room while Cheryl unpacked boxes in her scrapbooking/guest room upstairs. I heard this loud “thump” and looked up to see a huge box bouncing, almost in slow motion, end over end down the stairs — echoing that loud noise as it tumbled down each step. Cheryl stood at the top of the stairs, laughing as she saw her “plan” work to perfection.

“You’re never going to grow up, are you?”, I chuckled.

NOT SO LITTLE CONDO!

After being in “The Little Condo” (and the continual “enforced togetherness” that Cheryl, Michael & I enjoyed in that quaint but smaller space for two years) we are enjoying our more spacious new home just east of Morganton. The first morning after we moved in, I had a long devotional time down in the den on one end of the house, while Cheryl had her quiet time by a scenic window up in the bedroom. She then began working on unpacking some more of our belongings. I finally came upstairs, and when she saw me Cheryl exclaimed, in a fake “surprise” voice: “Well hey there!” I laughed and gave her a hug, and she said, “We could love each other for many years here — we’ll hardly see each other!” 🙂

This is my favorite spot in our “little cottage in the foothills”: my office/library 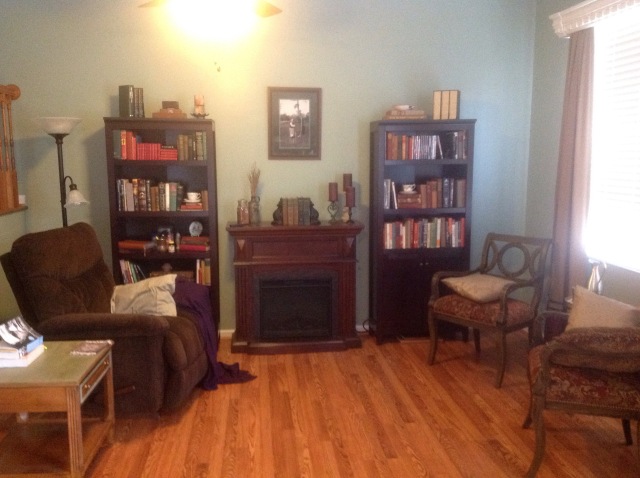 After a couple of weeks of break for the move, Cheryl & Michael began his homeschooling again, including Michael’s “favorite”, Algebra II.  The other day Cheryl wrote out a very long problem on the chalkbaord, which exemplified a new concept they were learning. As she wrote it, she said, “Now, Michael, what would you say if I wrote …” and she began to proceed writing out this long, complex equation.

What did Michael say to that?  “Ugh.”

Cheryl was doing her morning Bible reading when she heard me walk into the living room to go with her to run an errand.

“When you are,” I said. “Don’t hurry.”  Then channelling “The Princess Bride” I added: “Rush a quiet time, you get a rotten quiet time!”

One evening I brought home a frozen Chinese dinner that I bought on a whim when I stopped to get some things from Wal-Mart, and a day or so later, Cheryl decided to make it for us. When it was ready, we looked with dismay at the finished product in a bowl: “I think we could each eat one of these”, I said. “It would look pretty good if that were just MY bowl.”

Cheryl loves all of her grandchildren greatly, but sometimes she and Corley Jane, our first grandchild, seem to be two peas in a pod. Evidently, Josh & Libby have noticed this too. Not long ago, when they were talking on the phone, Libby told Cheryl: “Every so often, Corley will be doing something, and Josh & I will just look at each other and say, ‘Little Cheryl!'”

Cheryl was touched by that, and asked: “Oh how neat!” Then she asked: “What was she doing when you said that?”

Cheryl said Libby hemmed and hawed, and never did give her a direct answer. I laughed — I can only imagine!  🙂

Speaking of pretty grandbabies 🙂 we just LOVE that in God’s providence He has allowed us to be close to ours. The other day we dropped in on the kids at seminary at Wake Forest, where we saw that Miss Abigail is about a hair away from taking steps on her own:

And Miss Lottie, born the week before we started at the church, is already getting so big — and she has the sweetest, “quiet and gentle” spirit: 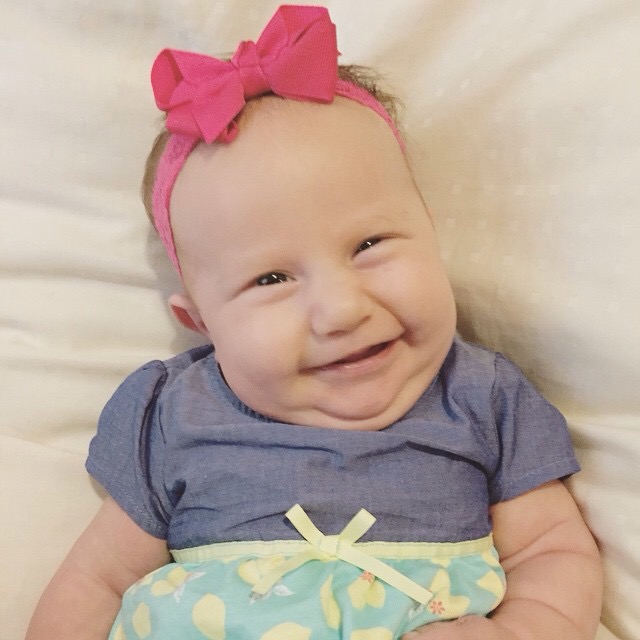 We are so thankful for how God has restored my health, and allowed us to pastor as fine a people as those in Pleasant Ridge, in as beautiful a place as western North Carolina. Heaven is my ultimate home, but for now I’m pretty grateful that He has us right here! 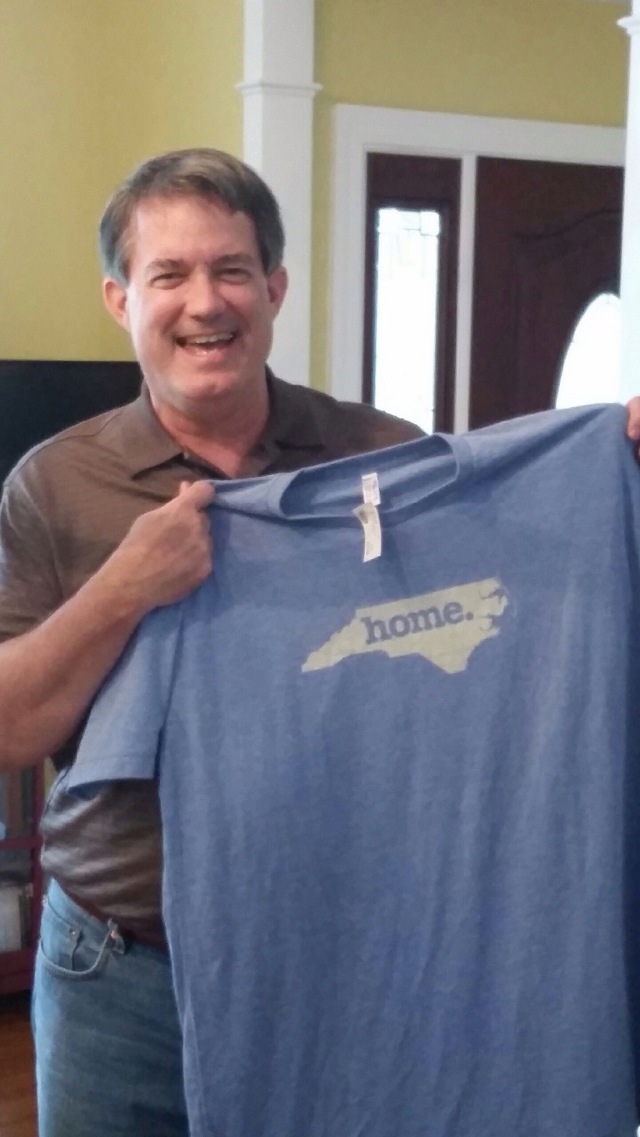 My blog, shawnethomas.com, provides brief devotions from own personal daily Bible reading, as well as some of my sermons, book reviews, and family life experiences.
View all posts by Shawn Thomas →
This entry was posted in Home & Family Life, This Week In Paradise (pastors family blog). Bookmark the permalink.

2 Responses to From A Cottage in the Foothills …