“Branching Out”: My Night With Tony & Ivy

“Hey, Brother Shawn, would you like to go to a Carolina Panthers practice with some of us next week?” Thus began one of the most interesting, and entertaining, odysseys of my life: an evening out with Tony Branch and friends.

Tony Branch is a member of our church in Morganton, one of the most colorful characters you will ever meet. He himself never meets a stranger, and he always has something to say. When he invited me to go to the practice, the first of the year for the Panthers, which they make a big deal of, he told me that Ivy Bradshaw, another member of our church, and others would be going as well. After checking my schedule, I accepted the invitation — and was assured by everyone who subsequently heard that I was going, that I was in for an entertaining evening. It did not disappoint, including good food, a lot of laughter, and some genuine close calls!

That Friday afternoon, on our way to the practice, we were taking what seemed like all kinds of twists and turns in the navigation of the route. Someone in the group mentioned something to that effect, and asked if Tony was sure he knew where he was going.

Tony began assuring us in the most emphatic terms, and concluded: “We know EXACTLY where we are going, don’t we Ivy?!!”

I burst out laughing!

At one intersection, I almost thought about saying, “Isn’t that a red light we are going through?”

But I didn’t say anything. We all made it through alive!

After we had been going for about an hour, I noticed a sign that said, “Welcome to South Carolina.”

“Yeah, the college the Panthers practice in (Wofford) is there.”

“Yeah”, someone quipped. “That makes everything a federal crime!”

One of my friends at Pleasant Ridge, a deacon, called me while we were gone.

One of the highlights of the trip, I was assured, would be the pre-game meal at The Beacon Drive In, a venerable restaurant in Spartanburg, South Carolina. It features classic southern cooking (burgers, fried fish, etc.) and an employee who takes your order and promptly yells it to the staff. And if it was busy, and if you couldn’t make up your mind, he might yell at YOU! (It turned out, I discovered later, that one of our ladies at church had this experience at The Beacon, and swore she would never eat there again!)

Someone asked: “Why would you want to eat where people are yelling at you?”

But The Beacon is a landmark establishment. I was pointed to the wall of pictures of famous people, including several presidents, who had eaten there:

Well, as it turned out, we made it through The Beacon without incident, partially thanks to Cheryl, who, when she heard about the potential penalty for indecisiveness, advised me to look up the menu in advance and have my order ready. So I looked it up en route, and obediently and promptly gave it to the man who yelled the orders. No problem for me at The Beacon. I felt like I had won a minor victory!

A serving lady came by our tables, and as he did with everyone, Tony began a conversation with her. They began talking about the town of Morganton, where we are from. “There’s a state hospital there”, Tony said. Then he added: “They let us out every so often!”

I’m not certain what the look on her face was conveying!

After we had finished eating, Tony was talking to the man who took our orders (naturally!) and I was able to get a picture with him.  He was nice; kind of hard to imagine him yelling at me! 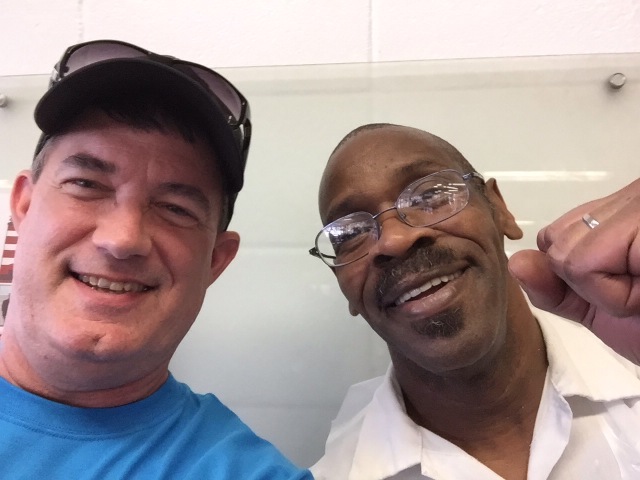 After dinner we made our way to the stadium — although not without incident. We needed to park close to the stadium, as Ivy had a legitimate handicap sticker. But after two routes around the stadium parking crowd, with conflicting and unfruitful directions from the attendants on where we should park, Tony took it into his own hands. He drove the van around a barricade and headed towards the closest stadium parking area. This, of course, garnered someone’s attention immediately. “I’m just looking for the handicap parking for this man”, Tony hollered at the policeman. The officer then pointed us in the right direction, and we ended up with a prime parking spot somehow. I’m fairly certain I would not have been so fortunate. Only Tony!

A few moments after parking, we were walking towards the stadium, which was live with all the festivities of NFL opening day: stands, booths, fans decked out in appropriate gear. As we approached the huge inflatable head of a panther, through which we would walk into the stadium, I asked to take a picture with the guys (Tony is in the center; Ivy on the right): 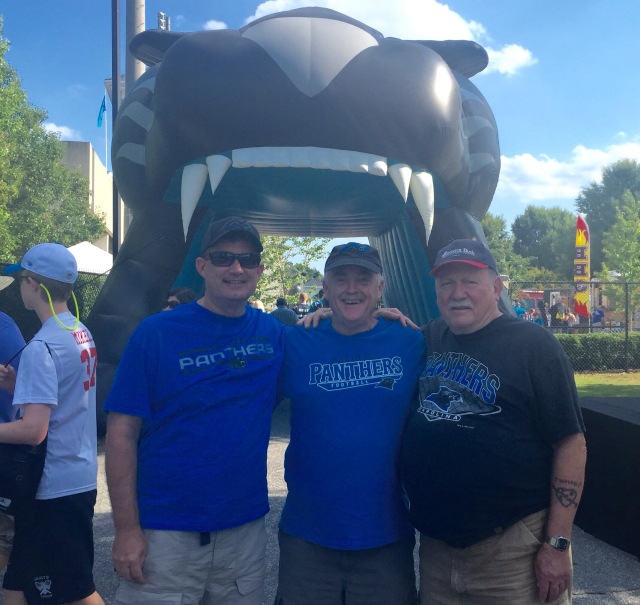 After we got the shot, Tony said, “You’ll want to get your picture taken with the Alley Cats too!”

“Who are the Alley Cats?” I asked. I should have known better. He told me it was the team’s cheerleaders. (His daughter assured me that their name was not the “Alley Cats”, but something else! I discovered later that they are called the “Top Cats.”)

At any rate, I told Tony I probably didn’t need to have my picture taken with the girls.

“Why sure, ” he said. “We can put the picture on Facebook, and Jim (our minister of music) will put it on the big screen at church Sunday morning!”

We enjoyed the practice. It wasn’t a “game” as such; it was the first day of practice, so the players warmed up, and went through a number of drills. They did run some plays against each other, and it was fun to see players I had previously only seen on television, work out in person.  Here’s Panthers quarterback Cam Newton throwing one of his first passes of the season:

At one point in the proceedings Tony was telling me how he knew that he was going to be out two Sundays in a row in September.

“You’ll be without your lead choir member for all that time.” Tony added humbly.

“We’ll probably have revival!” I concluded.

On the way out of the stadium and the surrounding neighborhoods, we took so many “zigs” and “zags” in the road it almost made me dizzy. But again, Tony “seemed” to know what he was doing. I was just about to say, “Man, I’m sure glad you are driving and not me ….” when all of the sudden, Tony makes a sudden U-turn right in the middle of the 4-lane road.

We drove the rest of the way home, with typical lively and entertaining conversation. Then we had a truly close call: coming over the top of a hill on Highway 64, we saw that someone had stopped their car at the bottom of the hill. We could see the vehicle immediately in front of us barely swerve and avoid the stopped car — it looked, incredibly, like perhaps they were changing drivers, in what could hardly have been a worse location! Tony deftly guided Ivy’s van around the stopped car as well, and we talked for several minutes afterwards about the close call, and the evident stupidity of that car’s drivers.

Not long afterwards, we arrived back at Pleasant Ridge Baptist, where I had parked my car. Starting to open the door of the van, I discovered that it was locked. I tried several times, and it wouldn’t open. I guess Tony realized that he needed to push a button to unlock my door, and I was finally able to get it open. “We had some close calls tonight”, I said as I got out, “but that might have been the scariest moment of the night right there!”

Laughing and shaking my head at the night I’d just had, I drove home to tell Cheryl the stories.

Bottom line of the evening:

Meal at The Beacon Drive-in $11

An evening spent with Tony Branch and friends: priceless!

My blog, shawnethomas.com, provides brief devotions from own personal daily Bible reading, as well as some of my sermons, book reviews, and family life experiences.
View all posts by Shawn Thomas →
This entry was posted in Travel and tagged Carolina Panthers, restaurants, The Beacon Drive-in, Tony Branch, travel. Bookmark the permalink.