What’s it like to live in a pastor’s family? You don’t have to guess — just read it here in “The Little Condo.” No names have been changed … 🙂

DRIVERS ED
It’s hard when you are riding along in the car while your child with his newly acquired learner’s permit is driving — especially when you see the need for a stop coming and it doesn’t seem like he is braking in time.
After several animated “conversations” Cheryl & I tried to stop telling Michael about how he needed to put the brakes on at every intersection — but as we approached each stop we would grimace and push our feet on the imaginary “brake” on the floorboard, all of our muscles tensed.
After one particularly excruciating stop, neither of us said anything for a few seconds, until Cheryl finally said quietly: “At least we’re getting a good ab workout …”.

DRIVERS ED (CTD): THE FLYING SUNGLASSES
I was in the passenger’s seat while Michael, armed with his learner’s permit, drove himself to a youth event the other night. As he pulled away from a stoplight, he gave the car way too much gas, and my sunglasses flew out of their holder by the rear view mirror, over the console, and into the back seat. Michael chuckled.
“That might mean you pulled out too quickly,” I replied — as calmly as I could!

MVP MOM?
Cheryl, Paul & I were watching a replay of the NFL Hall of Fame induction, where one of the players who was entering the Hall thanked his mom, calling her “the real Hall of Famer.” I said something to the effect that everybody felt the pressure to do that ever since Kevin Durant of the OKC Thunder tearfully called his mom “the real MVP.”
Cheryl then said, “Yeah, but Paul, because you aren’t going to the Hall of Fame, I’ll always be nothing.”
Paul retorted: “Yeah, I can say, ‘You’re the REAL nothing!'”

INVITATION QUESTIONS
A couple of Sunday mornings ago, following the Bible School program at the church where I am interim pastor, I invited anyone who wanted to profess Christ as Savior, or who desired to be baptized, or who had any questions, to come forward and meet me.
There is a whole row of special needs adults who sit near the front of the church, and along with several others from the congregation, one of these sweet folks came forward. He took my hand and said he had a question. “What is your question?” I asked him.
“What time is the pot luck dinner tonight?” he replied.
“You know, I’m not sure,” I said. “You’d better ask Brian (the minister of music who was leading the invitation song) over there!” 🙂 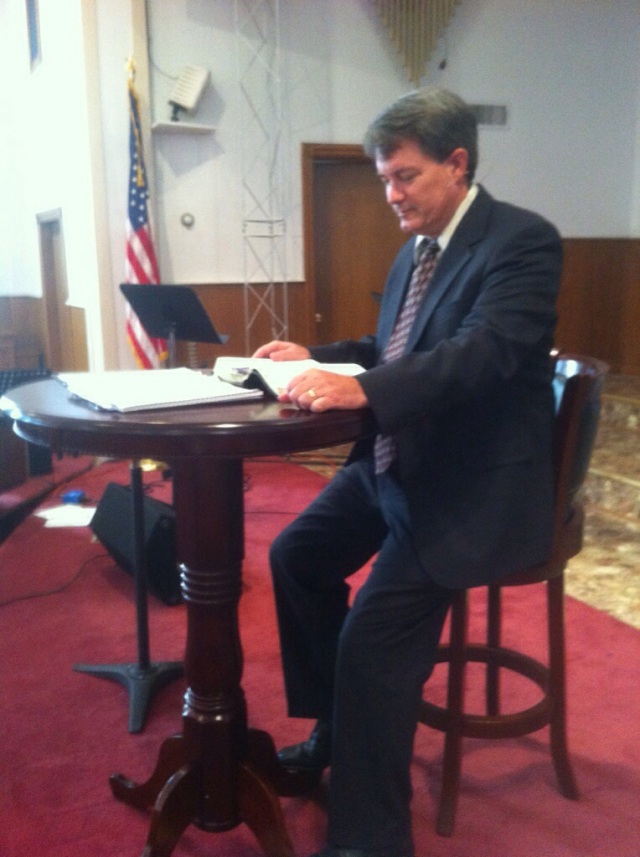 PERSONALIZED BIBLE
Cheryl: “Do you use an ESV (English Standard Version) Bible?”
Me: “I have one; I don’t use it every day.”
Cheryl: “It doesn’t capitalize ‘he’ when it refers to God or Jesus.”
Me: “Yeah, I can’t stand that.”
Cheryl: “I just write it in mine.”
Me: “You write the capital letter in your Bible?”
Cheryl: “Yep. I just write it in there with my pen.”
Me, chuckling: “Sounds like something you’d do.”

BIBLE, PART II
A week or so later, Cheryl & I were talking about the message after the Sunday evening service. I asked her about one particular facet of what had transpired that night. She said, “I don’t know. I was too busy correcting all the non-capital ‘he’s’ in my ESV Bible — there sure are a lot of “He’s” in Mark 6!”
Oh well. At least she wasn’t using a coloring book …

LOOKALIKES?
A former church member of ours saw the picture of me with the new “pulpit table” at First Baptist, Pauls Valley, and said I reminded him of “The Man From U.N.C.L.E.” on the old tv series. I looked it up and chuckled: I’m sure I’ve been called worse!

KISSING BABIES
We love Skyping with the kids and our grandbabies in North Carolina. (Actually it is a bit frustrating since we can’t actually love on them, but it is the best we can do!) As we were talking to David & Ashley & Abigail the other evening, Cheryl exclaimed: “She is so cute; how do you keep from just kissing her all the time?!”
David responded: “Well, a lot of that goes on around here!”
I can imagine! This will have to do for now:

My blog, shawnethomas.com, provides brief devotions from own personal daily Bible reading, as well as some of my sermons, book reviews, and family life experiences.
View all posts by Shawn Thomas →
This entry was posted in This Week In Paradise (pastors family blog). Bookmark the permalink.