Cheryl & I are so grateful to God for a safe mission trip to and from Romania the past couple of weeks, for the ministries we shared in, and especially the relationships we were able to establish and deepen. There were many answered prayers along the way — but also some moments we will smile about and remember forever. Following are some of them:

We all enjoyed eating from a little bottle of honey that Stefan (our host pastor) bought early in our trip, so it was getting low by the time we all finished breakfast one day, and headed to town to shop in some of the markets. Cheryl & Sara (pastor Stefan’s  daughter) & I went in one direction by ourselves, and in one of the first stands we saw, was a row of jars of honey. “Oh, let’s get some more honey for Stefan,” Cheryl suggested.  I responded that I was not necessarily opposed to that (one of my standard put-offish replies:-) “but what if someone else buys some?” “Well, it won’t hurt if they get two”, Cheryl said. She wanted to get a big one to replenish his stock, and I thought that two smaller ones would be more manageable, which we subsequently bought. But when we got back to the group, we were in for a surprise: “Stefan, we got honey!” Cheryl said. “We did too” he responded. “So did we” Ray & Norine chipped in. “Well, we got two” I said. “We did too!” Ray said. In all, we ended up with FIVE jars of honey!” I guess that’ll hold them for a while — in fact, our July mission team may be tasting some of that honey!

Oh, and speaking of Pastor Stefan, here’s one of my favorite pictures of him while we were shopping. He is a very serious guy:   😉 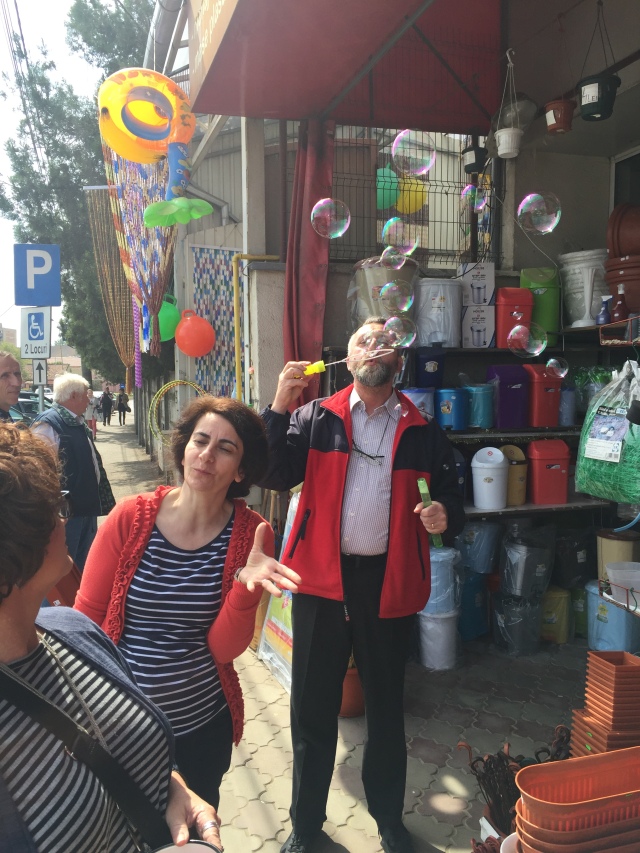 WHAT’S THAT ORNAMENT SAY?
Not too far from Satu Mare is a very unique site, The Happy Cemetery, which features gravesites with wooden markers, which are adorned with cartoon pictures of the deceased, and a brief written descripton of the person’s life.  In some booths just outside the cemetery we did our first souvenir shopping. Cheryl & I always enjoy getting ornaments for our Christmas tree from each place we travel, so we began looking for an ornament — or something that we could use for one. We saw a miniature version of the grave markers we had just seen in the cemetery, and although it was actually refrigerator magnet, we decided that we could hang it on the tree and use it as an ornament. We were excited to have the souvenir ornament, and went back to the van where we showed it to everyone. Sara read it and murmured, “Oh no …” and turned the ornament face down. “What?” Cheryl & I asked, concerned. “Well …” she said, “It says ‘Palinka (an alcoholic drink stronger than vodka) and women killed me.'” The whole van broke into laughter. We had not even considered to ask what the ornament actually said!  What a Christmas tree ornament — it may become one of our favorites!

ONE-WORD SERMONS
Perhaps our biggest laughs as a group came after I preached at Bethel Baptist in Ardud Wednesday night. Back at the house afterwards, we all sat around the kitchen table unwinding. I started reviewing my poor Romanian vocabulary. I said I guess I could preach a very short sermon in Romanian — about 4-5 words: “Multza mesk (thank you) … cu plechere (with pleasure) … ce faci (it is well?) bene (well)”!  They laughed at my VERY brief message — then Rodica asked me what would I do if I could only preach with one word?  I said, “I could do that!”   I took “ce faci” (“is it well?”) and I began by using it as a happy greeting (in my mind it was with an Italian accent! 😉 “Ce faci?!” Then I took just a moment to gather myself, looked around the room, and asked more determinedly: “Ce faci?” Then I looked at each person individually and asked them pointedly: “Ce faci?” Then I looked up to the heavens, as if to ask the Almighty what HIS view of our souls was: “Ce faci?” Then I asked with a final glance around the group: “Ce faci?”
Everyone was laughing, so Rodica asked me to do the same thing with some other “one-word sermons” — all followed by more laughter than it probably really deserved (it was late! 🙂  It just became one of those times you will remember always. Perhaps one of our favorite moments was at the end of the “marriage sermon” I was asked to do with my 4 words: after pronouncing my (very) limited blessing over the imaginary couple, I motioned them together to kiss, saying “cu placere!” (“With pleasure!”)

LANGUAGE PROBLEMS
It was fun trying to pick up some Romanian. One of our hosts told me that “at times” I almost sounded Romanian 🙂 Some of my attempts were better than others, however. At one point while we were all in the van together, we began talking about auto parts, as the Berci’s car had needed some minor repairs. I rightly guessed that their word for “radiator” is very similar to our English: “ra-di-a-tour.” Feeling very proud of myself, I told everyone that I believed that I could make a complete sentence, and described how I could now walk into an auto repair shop and tell them that I had a bad radiator. I would say: “Eo sunt radiator mare.” Our friends began laughing: “You just said, ‘I am a big radiator!'”

TRANSLATION CHALLENGES
Pastor Stefan’s wife Rodica Berci did an amazing job of translating my messages to the Romanian audiences. The realization came to me after one message, that no matter how good or bad one of my messages might be, it was HER actual words that were making the impact on the native audience! This is such a big responsibility, and should remind us to pray fervently for those who translate for our mission efforts!
To my knowledge, we had only one “glitch” in the works, and it was a fun one: the first Sunday night at Grace Baptist I was sharing from Psalm 5:3 about the importance of having a morning time with God.  After a few minutes I had settled into  what became a comfortable rhythm of saying a sentence and then waiting for her translation, then saying another. But at one point in the sermon I had shared a sentence, and I noticed that Rodica’s response was very short. I thought: “That was all the Romanian translation of that sentence?” I looked over at her, then she said something else to the congregation, and we went on. I didn’t think anything else about it — until after the message, when someone teased Rodica about what had happened at that moment: after my sentence, Rodica, caught up in the message, had just said, “Yes!” instead of translating it — then she remembered what she was doing, and gave the audience my actual sentence.  At least I knew she was really listening! 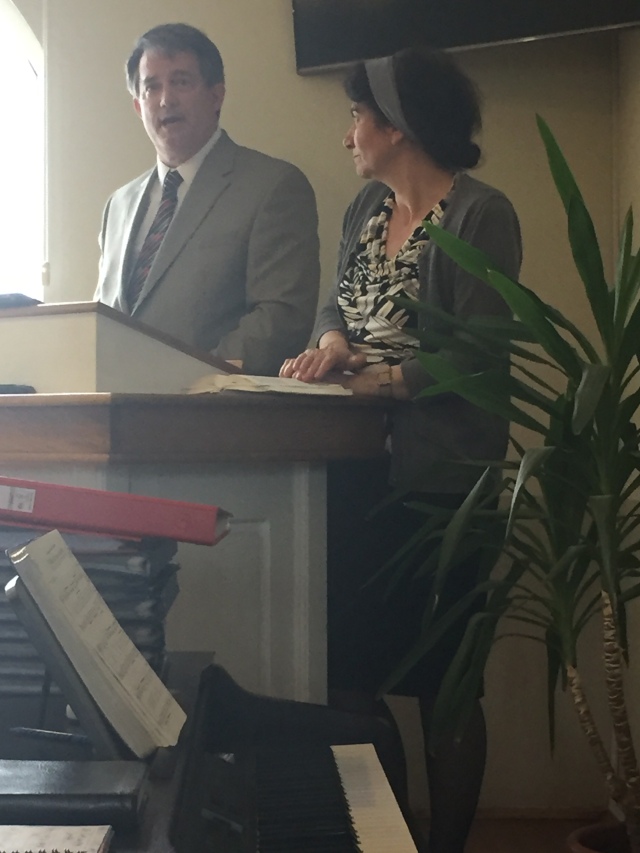 A SWEET SERENDIPITY!
Cheryl & I loved taking walks through the town of Ardud, most often with Sara. One evening she took us on a longer walk up to the cemetery where her grandparents on her mother’s side are buried. On the way back, we saw an old man in his horse-drawn cart, turning the corner in our direction. I was trying unsuccessfully to get a picture, so Sara hollered at the man. He thought we were asking him for a ride and said, “Sure, hop in!” Sara looked at us: “Do you want a ride?” It turned out to be one of the neatest experiences of the trip: Cheryl & I riding along on top of the rough sideboard of the wagon, an old pitchfork at our feet; Sara and the old man chatting in the front; the town of Ardud in the valley below, visible through a break in the trees. I just sighed to myself: in a moment this will be over … I must not forget it …

Or anything else about this sweet trip!

2 Responses to Smiles From Romania